If you want a small robust dog with lots of energy a Podengo Português pequeno is a good choice. They are very easy to teach and suitable to many activities, for example agility, obedience, dog show and even Lure coursing (a form of artificial rabbit hunt). Naturally the Podengo is also a wonderful pet dog.

The Podengo hunts with it’s sight and keeps a reasonable distance to it’s owner.

The Podengo is a very healthy breed in general. Never the less some cases of the eye disease ”PRA”, ”Luxating Patella”, ”Legg Perthes” and CECS “Canine Epileptoid Cramping Syndrome” have been found. When it comes to PRA we can do DNA tests for two of its variants to prevent at least those two variants to appear in our puppies.

This button opens the official breed standard. The PDF file opens in a new window/tab, please close this window to return.
Open PDF... 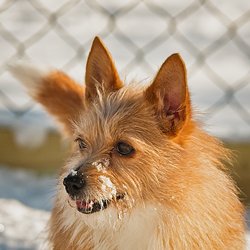 This PDF document is only available in the Swedish language. Please close this window to return after reading.
Open PDF...